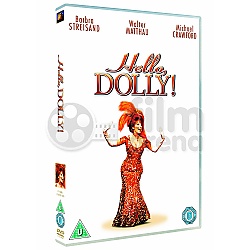 They just don't make musicals like this any more. There are some who would be grateful for that the plot is but a flimsy excuse to string together song and dance numbers.

Some of us, however, love big, splashy, overdone musical scenes, of which there are many. Glittering stage numbers showcase a commanding Barbra Streisand as Dolly Levy, a New York matchmaker who can find a mate for anyone. Anyone but herself, that is. Determined to marry wealthy Walter Matthau, she lures him out of Yonkers and sets about wooing him. Don't worry about the lack of a solid story or Gene Kelly's pedestrian direction. Watch instead for the musical numbers and the lavish costumes. Listen to Jerry Herman's score, and dance around the living room when a sequined Streisand arrives in a club as Louis Armstrong strikes up the title tune for her benefit.